Q. Can I view a Court file and make copies?

A. If a person is a party in a case, he or she may attend the court and obtain copies of documents on the file by paying for said copies. Unless one can demonstrate that he or she is an interested party, they will not be allowed to view and make copies of any files. It is important to note that the Access to Information Act does not apply to Court files unless it is a matter of an Administrative nature. See section 5(7) of the Access to Information Act.

Q. Can I speak to any of the Judges?

A. No. Only where you are in court or chambers as a litigant in a suit can such a request be accommodated.

Q. Where can I obtain a copy of the Court List?

Q. I have been called for Jury duty but cannot attend what should I do?

A. For persons called to serve in the Home Circuit Court/Kingston and Saint Andrew, a letter is to be written to the Chief Justice of Jamaica stating the reason for non attendance and a request be made to be excused from serving at the time stipulated on the summons. The letter should include a time when you will be available to serve. Medical reasons should be documented by a medical certificate from a doctor on a form obtained at the Court’s Office. For persons called to serve in all other parishes, they must attend the court on the first day of the service period and seek the permission of the presiding Judge for that circuit.

Q. Do I need a lawyer to prepare and file documents in the Supreme Court?

A. No, unless it is in relation to Divorce Proceedings. It is however recommended that all litigants be represented by Counsel in all cases because there are prescribed forms used to initiate and proceed in cases at the Supreme Court. Also, the Court does not provide advice or assistance in drafting documents for filing.

A. The Supreme Court

The work of the Supreme Court is conducted in a number of different divisions, based on the nature and subject matter of cases to be heard. These divisions are Criminal (Circuit Court), Civil, Commercial, and Review/Constitutional. Specialised Superior Courts in which Supreme Court Judges sit have also been created to complement the work of the Supreme Court. These are the Revenue Court, established under the Revenue Court Act in 1971, and the Gun Court (High Court and Circuit Court Divisions ) established under the Gun Court Act in 1974. The Gun Court Act was amended in 1999 to include the Western Regional Gun Court, with geographical jurisdiction for the parishes of St. James, Hanover, Trelawny and Westmoreland.

A. The Parish Courts

The Parish Courts deals with both civil and criminal cases but has limited jurisdiction in the following ways:

Q. How are Judges of the Supreme Court appointed?

A. A Supreme Court Judge is appointed by the Governor-General of Jamaica on the recommendation of the Judicial Services Commission. A candidate for Judge of the Supreme Court must be an Attorney-at-Law with at least 10 years standing at the bar.

Q. Is the Court open to the public?

Q. Is parking available to members of the public?

A. Paid Parking facility is available for the Supreme Court and Court of Appeal at the UDC public parking building behind the court building at the usual parking rates.

Q. Do the Courts have a dress code?

A. Yes. Members of the public are to be modestly dressed and as such shorts, merinos, sleeveless shirts, tights and very short skirts are not allowed. 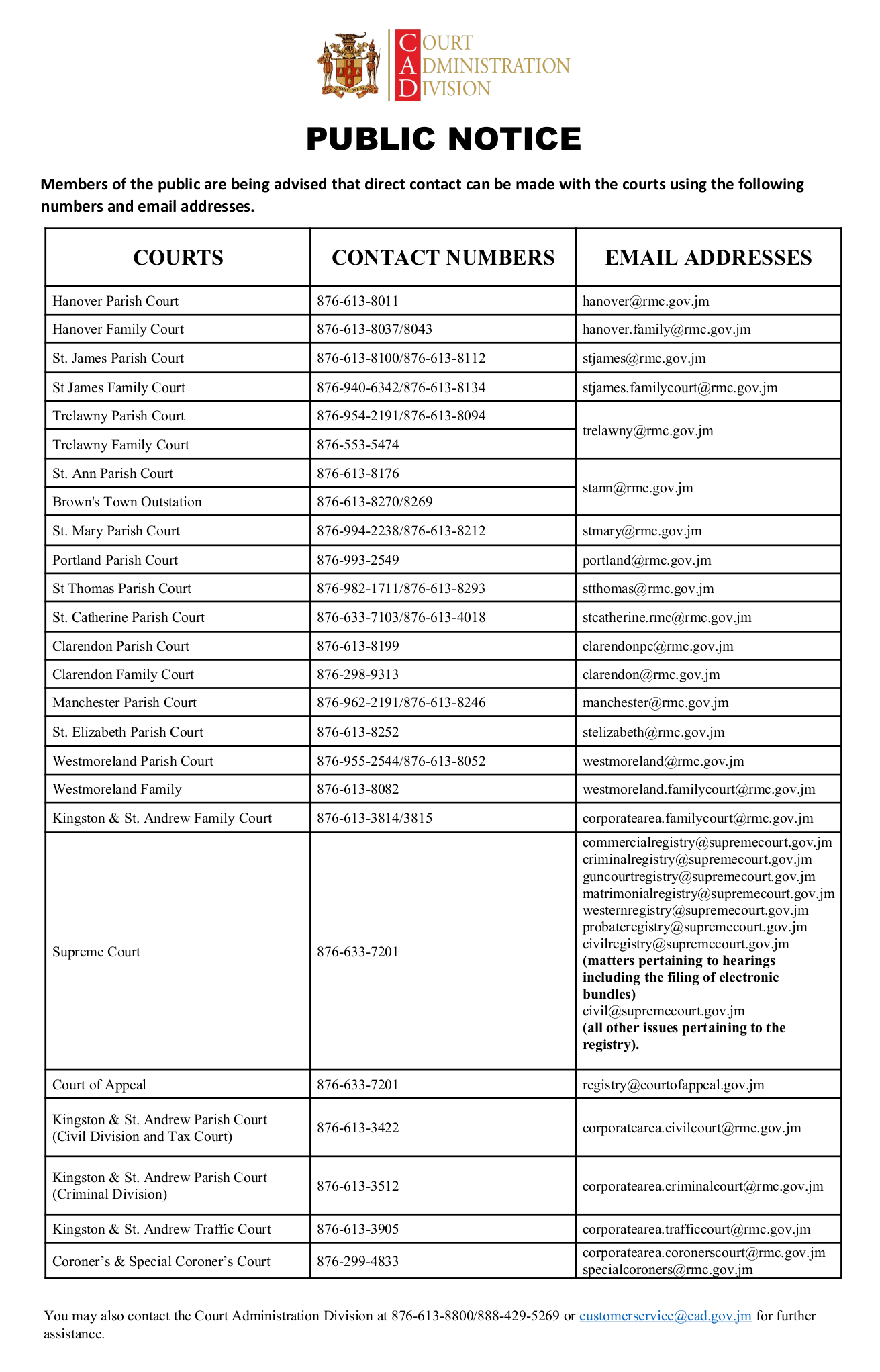